T-Mobile’s MetroPCS prepaid brand launched a new promotion today. With it customers who port a number to MetroPCS can get a free Samsung LG Leon, Galaxy Core Prime or Kyocera Wave LTE Android phone and an extra 1 GB per month of high speed data. As usual with promotions, there are a number of conditions you need to meet to take advantage of the offer: 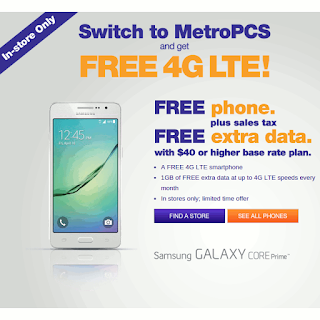 The Samsung Galaxy Core Prime is a recently released entry level LTE Android phone with a 4.5 inch 480x800px screen, quad-core 1.2 Ghz Snapdragon 410 processor, 1 GB RAM and 8 GB of internal memory. It has a 5 MP main camera with flash and a 2 MP front-facing camera.

The promotion’s added GB of high speed data gives MetroPCS’ $40 plan 3 GB of high speed data and the $50 plan 5 GB.  Both plans also include unlimited talk and messaging and unlimited data throttled to 128 Kbps after the high speed data is used up. There’s a $5/month multi-line discount on each line for accounts with two to five phones. Using the phone as a hotspot is permitted and there are no taxes on MetroPCS plans.

Update: The offer has been extended until 1/ 4/16 and the LG Leon and Kyocera Wave have been added to the list of eligible phones.